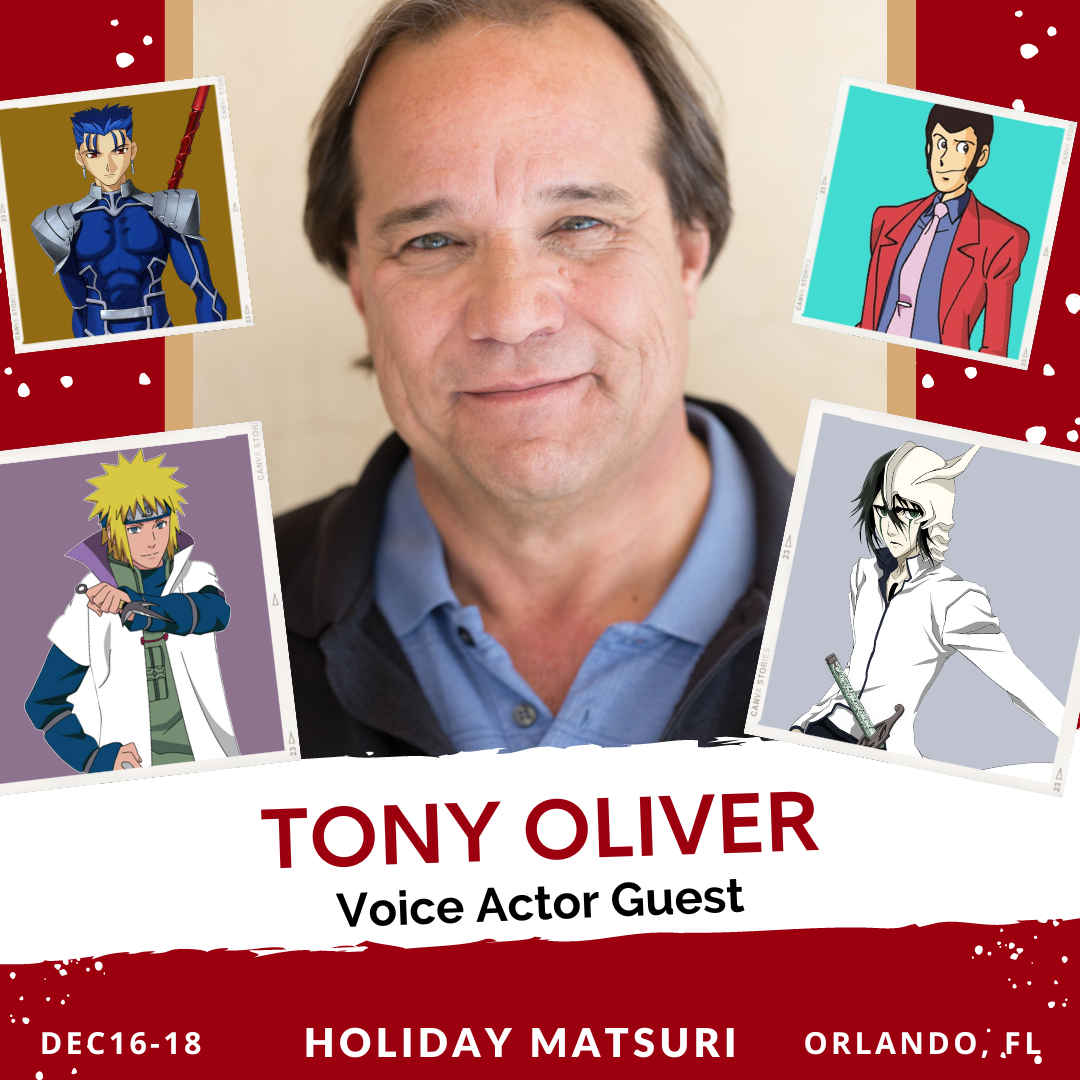 Meet the voice of Gojyo in Sayuki Reload, Ulquiorra in Bleach, Lupin in Lupin the 3rd, Minato Namikaze in Naruto, Lancer in the Fate series and many more!

TONY OLIVER, who was named to IMDB’s top 20 all time Anime Voice Actors list, began his career as an actor on stage and camera performing in several feature films and dozens of plays. He found success as a voice over artist, lending his voice to one of the first foreign made animated features to receive wide US release (“The Sea Prince and the Fire Child”). His first foray into television was as the voice of Rick Hunter in the groundbreaking anime series “Robotech”. Following that he turned his attention to writing but continued his voice acting career. In 1988 he joined Saban Entertainment as a story editor where he wrote and produced an award winning adaptation of “The Jungle Book” and story edited the long running Nickelodeon anime series “The Noozles”.

In 1992, Tony was tapped to help create a new kind of children’s television show. The result was the mega hit, “The Mighty Morphin Power Rangers”. Tony not only served as the development producer and head writer but also wrote the pilot, Co-Produced the series, directed the voice actors, played the voice of Saba, and produced the Power Rangers live appearance at Universal Studios, which drew an estimated 50,000 people on a single day. Later in the year he co-developed and wrote the script for the international sensation “Mighty Morphin Power Ranger – Live Tour”.

More recently he co-adapted and directed the English releases of “Fate/Zero” and “Fate/Stay Night: Unlimited Bladeworks” in which he also voices the character of Lancer, “Love Live” (both the series and the movie), “Charlotte” and “God Eater”, and can be heard the animated musical series “Iesodo” in the title role. He can currently be heard in new episodes of Lupin the 3rd on Cartoon Network and as Minato, the 4th Hokage in “Naruto”. Tony is currently directing “Fate: Apocrypha” a Netflix Original, “Hunter X Hunter” and “Jojo’s Bizarre Adventures” for Cartoon Network and has two, soon to be announced Netflix Original animated series premiering in the spring and summer of 2018.